How I fixed my new YN565EX flash

Yesterday I have received my brand new YN565EX flash by Yongnuo from Hong Kong. It took almost a month for it to get to Estonia, but shipping was free.

The flash is very similar in specs to a much more expensive Canon 580EX II, with minor exceptions, e.g. no Hi-Speed sync or ETTL Master mode. However, the flash supports ETTL Slave mode of both Canon and Nikon systems, so this was the primary reason for buying it - use as a powerful (guide 58) slave flash unit in automatic TTL mode. As a bonus it can also be a slave in manual mode as well - overall a better option than buying a 430EX from Canon, which is even slightly more expensive, for the same purpose. The reviews on the net were very good and I was impressed with the build quality, which matches flashes made by Canon.

But all would be cool if it worked... There is much scepticism for buying of Chinese flashes, and there seem to be a reason for that. The flash powered on for the first time and then quickly shut down. It completely ignored any presses of the On button afterwards and soon I noticed that the batteries get very hot while they are inserted into the flash unit. Bad, bad, bad. My option would be to pay for return shipping and wait for 2 more months until the new unit is delivered. Not a sexy option.

So I decided to give it a try to fix it myself. Hot batteries suggested there should be a short circuit somewhere and if it is not a major component, it should be fixable.

The flash is very similar in design to Canon 580EX, so searching for its schematics helped to understand how to disassemble it.

1. Unscrew the 4 screws on the bottom of the flash unit to remove hotshoe connectors (contacts can be easily disconnected once the bottom panel is open)


2. Turn the flash head 90 degrees to reveal 2 more screws at the upper part of the body, one is under the sticker, which looks like a 'warranty void' one, but as there are no such words on it - it felt safe to remove it. I suggest making pictures of the screws to be able to assemble everything later - they are all different.

3. Now was the most difficult part with which I struggled for some time. By now you should be able to remove the front cover of the body, but it feels like there is still something holding it at the top - actually there are no more screws, so just try again and again to gently pull it off. No sliding down, etc is necessary, just pull the front panel off the back panel, the position of the head is not important at this time. After you are successful, disconnect the two connectors and put the front cover away. 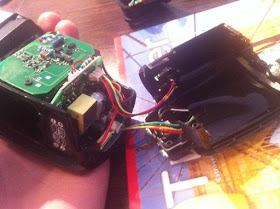 At this time I put the batteries back inside several times and used a voltmeter to understand where the voltage drop happens. After some tries I was lucky to see some smoke. This might be scary, but I quickly removed the PCB at the bottom of the flash on which the coil and 1000uF capacitor are mounted on the picture. Be careful with touching the parts - you may get an electric shock even if batteries are removed, this is due to a 300V giant capacitor which is hiding at the base of the flash head. 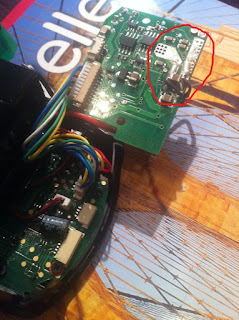 The cause of the smoke most probably was residual soldering agent on the back of the board - see the picture to the right. It was melted and probably was the reason for the short circuit. I used a small screwdriver to clean it off between the two large contacts. Note that checking for it with a multimeter is difficult because there are capacitors mounted here, so probing for resistance can still show some value until the capacitors are charged (and there is a big one there!). After inserting the batteries the flash turned on! The problem was identified, so I have spent some more time cleaning the contacts by gently scratching and wiping off with alcohol.

Now the flash works perfectly both in the hotshoe and as a slave. There are no problems with balance of light with my Canon 580EX II - at least I haven't noticed any difference so far. The only minor problem that I have noticed is the modelling light (when depth-of-field button is pressed) gets darker by the end of the 1 sec interval it is supposed to be visible, but it may depend on how well the batteries are charged.

Overall, I am pretty happy now. Buy yourself one if you have basic disassembling/electronics skills to protect yourself from minor manufacturing defects. I really hope the QC will improve at Yongnuo.